A scaled model of the Giza pyramids – or full-size models of their pyramidions (headpieces) – accompanied by mirrors to reflect their construction from different positions. 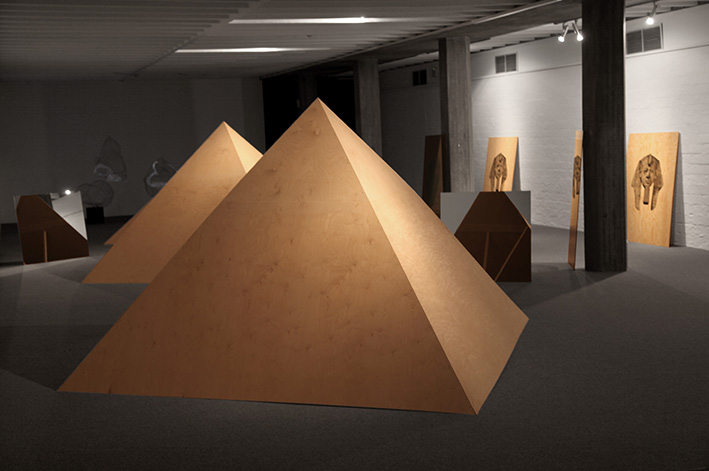 The re-discovered of Ancient Egypt in the 18th century gave way to an archaeology that was to transcend many layers of mediocracy pervading in Victorian sciences, and would open the door towards a full system’s analysis on language, culture, technology and administration of a whole civilization. It was Napoleon’s scientists who were to lay the foundations for modern-day Egyptology to emerge at about the same time that the emperor was denouncing phrenology as the pseudo-science it is considered to be to this day. It is not without irony that Egyptology may still be linked with mystic leanings while many assumptions of phrenology have had the habit of prevailing in society at large. This pseudo-science would wane in popularity due to the social conditions that prevailed in post-revolutionary France, but would find more fertile grown in England where its government propagated class structure and colonial expansion. And it was precisely in this atmosphere that certain portions of the scientific community who perform mental cartwheels to establish Caucasian origins of pharaohs that Napoleon’s scientists concluded to have been of African descent as a matter of self-evident deduction. (Ramses II happens to have been a particularly prominent pharaoh whose body would come to show high levels melanin when tested.) 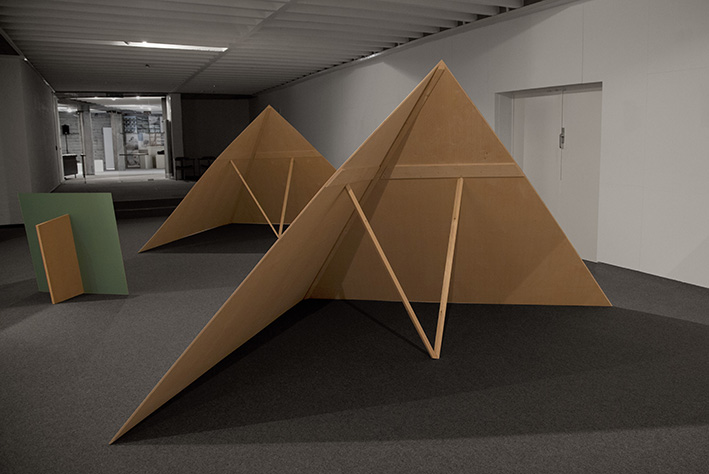 The ‘occult’ means ‘hidden from the eye’ and is a term that can be associated with any knowledge, society or idea not easily detected by the naked eye. It is in this respect that the existence of the atom is equally the product of the occult as is fortune-telling – for the spectator their reality is merely a matter of faith. And so it was to be in the 19th century that the merger between Romanticism and scientific reason would come to be symbolized by the pyramids, obelisks, triangles and trapezoids that had formed recurring motifs within the Enlightenment at a point in history when scholars had found higher levels of math amongst men who had stranger religions then they. These are geometrical shapes that held an underlying logic in the mathematical execution of form that may explain symmetry in the ritual of reality unfolding within its restrains. As the uppermost stones of a pyramid – the pyramidion is the paradox of this particular reality. The pyramidion completes a pyramid by being the top section of the total construct while it is also a scaled version of its own whole, i.e. a miniature pyramid. The three pyramids on exhibit can be understood in these two ways: besides being scaled models of the Giza Pyramid Complex, they are also life-size models of their pyramidions. Another words: they are either models of pyramidions, or they can be understood as scaled down versions of the whole structure. The relationship between the shape of a head and the shape of a pyramid is just this; it is the contradiction of shape in the ability of proportion to transcend any attempt to summarize its content. 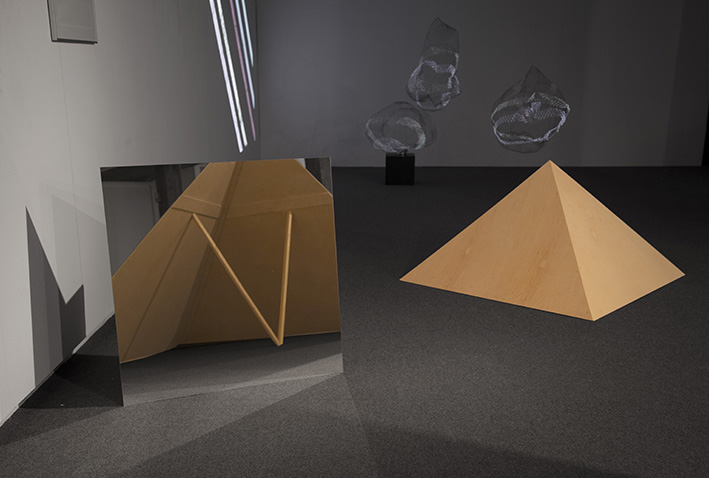